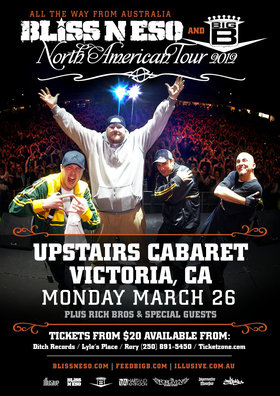 Bliss N Eso are teaming up with Las Vegas heavyweight Big B for a co-headline whirlwind tour of the US West Coast and Canada.

After meeting in the States years ago, the two acts have formed a strong bond which came to a head with Big B supporting the trio on their record-breaking 2011 Australian tour, which saw them perform to over 65,000 fans across the country – the largest ever for a local hip-hop act.

Bliss N Eso, which comprises of MCs Bliss and Eso alongside DJ Izm, are a multi-platinum Australian hip-hop group who are generally regarded as having one of the most electrifying live shows in the Southern Hemisphere. Their latest album, Running on Air, debuted at #1 on the ARIA Album Chart, they have also won an ARIA Award for Best Urban Album and they regularly headline Australia’s biggest music festivals – not bad for a country where rock music still reigns supreme.

Big B has been an underground figurehead since he first debuted on the scene in 2004. He has become known for his raw and honest style, some likening him to a modern day Johnny Cash, where he blends his own elements, namely hip-hop, alternative rock, country and even a little laid-back reggae vibe. In recent times, he has expanded his fanbase through regular appearances on A&E’s hit television series Inked and a major promotion through Madison Square Garden summer advertising campaign.

This tour is a chance to catch two rising stars of the hip-hop world up-close and personal, and is an opportunity not to be missed.

Show ends at 1am, come early!

From an early stage in their career, Bliss N Eso primarily built their fan base from their compelling and energetic live performances. An exhilarating blend of fluid rhymes and banging beats teamed with beat boxing, impromptu freestyling and seamless turntablism make their live shows a brand in their own right, and has seen the group hailed as one ... more info
Submit info on this show to our admins