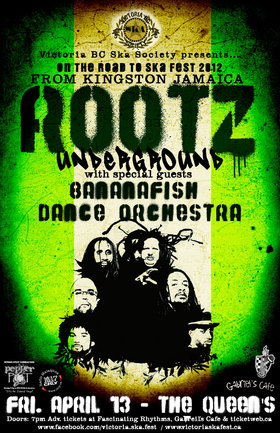 Music: Folk / Celtic / Latin / World, Funk / R&B, Jazz / Blues, Reggae / Ska / Dub
Rootz Underground represents Jamaica’s most recent contribution to the International Reggae & World Music scene. While undeniably rooted in reggae the six-member outfit uses their collective passion to create a sound that pushes boundaries and defies being boxed into a single genre. Electric yet organic, gritty and soulful; the band manages to harness the essence that the reggae aficionado was captivated by in the 1970’s while connecting the youth to the pure messages of Rastafari with explosive live performances that are a positive and emotional musical journey.

Revolution reggae music - edgy, raw, natural, roots... They are Rootz Underground. That is their sound. Kick down the walls, burn the paper the rules are written on and mash down the “box” that limits a sound to a single genre! Rootz Underground is here to channel the musical vibration that rings true in the heart and soul of all the conscious... more info