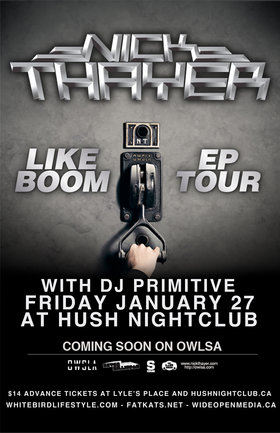 "There is no-one else who can drop a set like Nick Thayer. Every single track is his exclusive. An original. A remix. A re-edit. A bootleg. A mash-up. Equal parts hip hop, club, rave, house, drum and bass. No-one can put it together like Thayer either. Perhaps it is the throwback rock moves, the seat-of your-pants approach. Feeling kinda like a freight train on the edge of control. Some jams you will definitely know, some you might know, some you definitely won't. All will make you move.
In the studio Nick is one of the most widely recognised and respected names across a multitude of genres. Massive tracks like Ca$h Money, Reach For The Lazers, Mind Control (as found on PS2 game 'Motor Storm'), and the MOP approved Ante Up remix have all blasted through sound systems like dy-no-miiiite. Sway, DJ Yoda, Wizard Sleeve, AC Slater, Sporty O, Trevor Loveys, A Skillz, and Black Noise are part of the long list of people Nick has worked with in the past year alone. With releases on Southern Fried (Fatboyslim's label), Passenger, Sweat It Out, Klub Kids, Insane Bangers, Bombstrikes, and many more, you'll find everyone from Kissy Sell Out to Freestylers to Cuban Brothers to Utah Saints rocking his tunes week in week out in the clubs.
May 2010 sees the long awaited release of Nick Thayer's album 'Just Let It Go' through Passenger. Musically it forms an amalgamation of sonic sound clashes. Alongside this Nick has been working with visual artist sevenmilligram creating a DJ/AV show. As with all of Nick's endeavours this is aimed squarely at the club. The focus is on making you jump, using the visuals to connect in another medium.

There ain't no party like a Nick Thayer party. Put your rave shoes on and get ready to dance."

Startin' us up will be the funky ass sounds of local banger DJ Primitive!

Don't sleep on this one kids.
Ticket info to come!