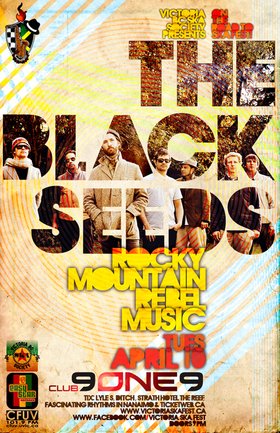 
The Black Seeds from windy Wellington, New Zealand have become a musical powerhouse throughout New Zealand, Europe and North America. In the summer of 2010 the band embarked on their first North American tour that brought them all over the United States and into Canada's west coast for three memorable shows in Vancouver, Whistler and the world-renowned Victoria Ska Festival (in Victoria BC, Canada).With the support of Easy Star Records, their fans, fellow musicians and ex-band mate and now world-famous Bret McKenzie of Flight of the Conchords, their last album "Solid Ground" (on Easy Star) received rave reviews; described by JamBaseas "one of the best, forward-minded reggae releases this year...the forefront of reggae" and by The Huffington Post as "a damn fine record…the most inventive thing out of the South Pacific in decades." Now back for another helping the band is touring again throughout Europe, and North America with a brand new album to be released in April 2012.

The Black Seeds will perform two exclusive west coast Canadian dates in Victoria, British Columbia on Tuesday, April 10th at Club 9ONE9 (this show presented here), and Vancouver, British Columbia on April 11th, 2012 at Fortune Sound. These two Black Seeds performances are proudly presented by Victoria BC Ska Society. Both BC shows will be "On the Road to Ska Fest events in preparation for the highly anticipated Victoria Ska Festival 2012 (July 10 - 14, 2012) throughout various outdoor and indoor venues in Downtown Victoria.

other sites: myspace
"Rocky Mountain Rebel Music is a musical party on a rampage. A juggernaut that is one part ska/reggae band and one part funk-rock, all with the Take-No-Prisoners/DIY ethic of punk rock and a slight Latin flavour. At 9 members strong, RMRM brings an onslaught of vocalists, guitars, keys, horns and percussion to the table." The Zone 91.3FM. ... more info
Audio: Try So Hard
Articles: Interview with Rocky Mountain Rebel Music
Videos: