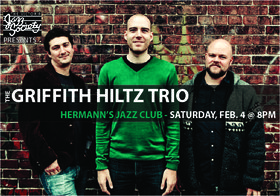 Music: Jazz / Blues
Johnny Griffith and Nathan Hiltz, longtime friends and creative collaborators, were on to something when they incorporated the bass pedals that had been gathering dust in Johnny’s basement into their weekly jam session. Inspired by their curiosity of using vintage technology to replicate an organ’s place in a trio, these fearless multi-instrumentalists began to co-create and something truly unique was born.

The Griffith Hiltz Trio takes the term ‘multi-tasking’ to the extreme. Each member masterfully contributes to the groove on more than one instrument, simultaneously, to produce a beautifully layered musical tapestry and making this trio sound much larger than it actually is. Nathan Hiltz (formerly of the Pocket Dwellers), the most promising Canadian guitarist of this generation, soft-shoes his way across an array of bass pedals with the deftness of Gene Kelly. The spirit of Rashaann Roland Kirk is channeled through the daring multi-reed explorer Johnny Griffith and the ever-tasteful, precise, and supportive Sly Juhas seems incapable of playing anything that isn’t "right on the money!"

Their debut album, Now and Then, produced by and featuring Canadian jazz icon Don Thompson, was released in July 2009 to much acclaim and was voted the #1 Jazz Album of 2009 by Jazz FM in Toronto.

Their new album, set to be released this spring, is being produced by Hawksley Workman. The Griffith Hiltz Trio returns to Victoria by popular demand after their much acclaimed gigs at the TD Victoria International JazzFest 2011.

“With uncommon telepathy… they write memorable themes rooted in the blues and bop, playing off one another with total confidence” Johnny Griffith and Nathan Hiltz, longtime friends and creative collaborators, were on to something when they incorporated the bass pedals that had been gathering dust in Johnny’s basement into their weekly ja... more info
Submit info on this show to our admins