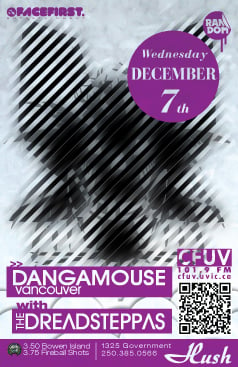 Originally from Scotland, Dangamouse first discovered electronic music while still in high school, listening to underground mix tapes from the likes of Dj Hype, Citadel of Kaos, Luna C & The Prodigy he fell in love with the breakbeat sound. Scraping up enough money to buy his first set of turntables at age 15 he cut his djing teeth on the hardcore & jungle sounds of the early nineties. Sticking to his breakbeat roots DM progressed into Drum n Bass & Nu Skool Breaks. Then around 2003 a brand new sound called Dubstep caught his ear & he has been experimenting with low bass frequencies ever since. Never one to be pinned down to just one genre Dangamouse draws on his years of expierience to bring an eclectic mix of bass heavy beats to any dance floor.

Dangamouse spent many years organizing events in his home town of Glasgow, including being involved with the city's legendary 'Camouflage Parties' & his own seminal breakbeat night 'Tongue n Groove' as well as hosting radio shows on Subcity & NuskoolBreaks.com.

Most recently Dangamouse was recruited by Vancouver promotion crew Fractured Technique as there in house Dubstep resident. Focusing on the deeper underground sounds of Dubstep & Drum & Bass they have some heavy weight artist lined up for the coming months.

The Dreadsteppas are Victoria's premier natty trio of sonic destruction. With over 15 years of combined experience, Dezine, Okibi, and Spoon bring a proper selection of bassweight tunes to every set. Utilizing turntablism, double-drops, mashups and a slew of effects, the Dreadsteppas are a unique and high-energy act. With a growing monthly at Hush Nightclub (now running for over a year) and numerous shows around the Island, the Dreadsteppas have generated a substantial following. No other crew rinses out dubstep and drum and bass like the Dreadsteppas! http://www.unionsoundsystem.com