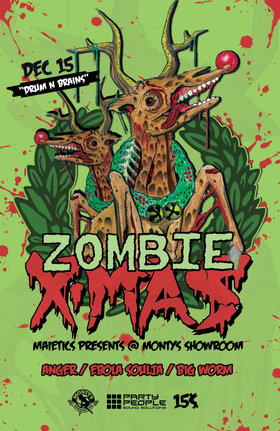 Music: Electronic / DJ
In the wake of a viral outbreak of unknown origin up at the North pole compound, an unspeakable zombie massacre involving all the elves and christmas help has transpired. Military is now on site and The North Pole has been quarantined and locked down... just not soon enough. Rudolph and his flying heard of Zombie reindeer took to the skys in the direction of Canada's west coast. They were last seen decending upon Government St. in the unsuspecting city of Victoria, hungry with brain lust and ready to rip the holiday spirit out the throats of anyone who crossed their path....

Ex-Hailing from calgary AB, representing the 403 DnB. BIG WORM reigned as a heavy hitting staple in Cowtown's Drum n Bass scene for a decade plus; putting his time in as both promoter and grime slayer every chance he got. Up until his recent, unsightly demise, the man crushed dance floors and melted bass brains on a weekly basis, every friday night at Quincy's Pub (Calgary) as both resident host and Dj, with crew members Tyler Obcene and Chris Proph "403 DnB".

Returning from the grave for his second Victoria feast of the year, Worm's got worms eating his decaying flesh and but one instinctual drive firing again and again deep in his cerebral..... to drop the serious evil all over the blood splattered floor of Monty's Exotic Showroom.... if you didn't catch him the first time he came through, be warned, Worm took no prisoners when he was alive... now that he's undead, he doesn't know how to "take no prisoners..." he just eats peoples faces.

Victoria legend DJ ANGER, destroyed everything from bush parties to bar nights for 10 plus years all over Canada's Westcoast; puking musical versitily and turntable-ism to every crowd he stood in front of. Be it his own headlining spot or opening for the likes of the largest that passed through Victoria (the great KRS 1 as of recently), Anger always gave the Party People all the Sound Solutions they craved. He was a force to be reckoned with in the flesh, and he will continue to devour any and all stages, speakers, bass bins, audiences, christmas parties, elves,hip hop heads, junglests, thrashers, snow angels, real angels, woman, man, child, dog, cat, wolf, hamster, cattle, monkey heart, raver, ostrich kidney, iguana, manatee, sandwich, mountain goat, fainting goat, sloth, marsupial mouse, alan or steve groundhog etc... etc... etc... until whats left of his rancid rotting flesh drops right off his filthy broken bones... Evil Anger is dead and don't give a fuck...

EBOLA SOULJA - The most probably cause of the Virus

He floats in silent and flips your guts to the outside, like the fog from the Simpson's halloween special. He hangs in the dirty and carouses with the vermin like the black plague of Europe's dark ages. He rips your mind apart like doing bad acid on day two, while spending the weekend at the hotel from The Shining... and he does it all with a crooked smile as he orchestrates the soundtrack to Victoria's holiday season going to straight to hell...


come Join us this Dec 15th at "Monty's Exotic Showroom" on Government and Johnson, as we celebrate this christmas in a darker light.

free Blood at the Door.

This christmas season, give the gift that keeps on giving... A Zombie Virus.....