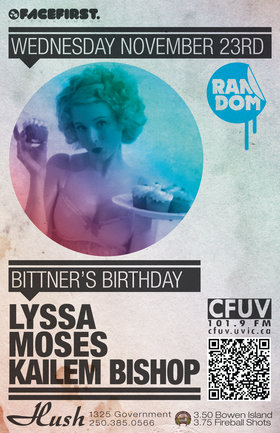 Music: Electronic / DJ
Theme of the night: Hot n' Bothered. Dress like you know how n' wear your hair like you just did. I'll be giving away a bar tab or two or three randomly throughout the night, so you should probably come early and stay late ;)

Tip: Historically, 94% of all female bar tab winners wore open toed shoes at the time of their selection.

And now I present to you the stars of the evening:

Alissa is passionate about art, cooking, clothing & costume design, music, & dancing. As "NeonSally", she spent many sleepless nights dancing all over the interior of BC & under the stars at The Shambhala Music Festival to her favorite DJs.

Alissa's first appearance as DJ "Lyssa" took place in 2005. Having spent 11 years in Mexico, and being fortunate enough to be exposed to Latin culture, she has a strong desire to explore her roots in her musical selections. Depending on what mood we catch her in, hot summer afternoons call for deep sexy Chicago beats and bouncy latin-infused house, and on colder nights, expect anything from dirty deep organic tribal tech to quirky & fun latin tech house....

She made Victoria her home in spring 2007. She has had the privilege of performing at summer festivals like Shambhala Music Festival, Victoria Electronic Music Festival, Entheos, Uprising, and Solaris, as a solo dj, with Skylo Raine as "UFO", or Alchemist Him as "Odds n Ends". You can catch her performing at some of the city's coolest lounges & underground hotspots like Hush, The Sunset Room, & Base Lounge.

Originally started as a Deep House mixer, Mo later branched out into Funky, Electro House as well as Break Beats. He’s been playing for eight years all over Canada. He has been a resident in various cities, from the Yukon to Ontario, and played in an array of clubs. Influences like Ben Watts, Johnny Fiasco, and Erick Morillo helped shape his style today. Expect a high energy set with high quality music and a big emphasis on getting the crowd bouncing and smiling. New to Victoria he’s hoping to throw down his style of unique electronic music and keep those crowds moving.

Started his DJ Career over 10 years ago in the Vancouver Nightclub scene, holding residencies at many of the top clubs in Vancouver as well as many after-hours venues and events. Playing everywhere from underground parties, to live radio and television, Kailem has adopted his own pliable style and is one of the most flexible House music DJ’s around. Playing an infusion of everything from House, Progressive, Vocal, Electro, Techno, and Tribal makes Kailem very versatile, Tailoring his Energetic Sets to his Audiences and Clubs. His style has graced countless dance floors and wowed thousands of club goers. With guest spots in other major urban centers, Kailem has carved out a niche for himself in the Western half of North America as a DJ of choice for any club event big or small.


Brought to you by Face First Entertainment. http://www.hushnightclub.ca