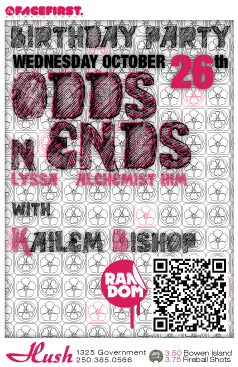 Odds n Ends is comprised of two questionable characters, Lyssa & Alchemist Him. Separately, they are solid performers, but a couple of years ago they noticed that when they combined forces, all hell broke loose (time and again, what a mess)....

Michael Smith, aka Alchemist Him, grew up in a small town on the East Coast of Canada. A couple of disappearing acts later he surfaced in Victoria, BC with a raging passion for thumping beats and dancefloor destruction... His tastes have spanned from his early beginnings in electro and fidget house, to more recent influences of Chicago house, disco, techno, and tribal house. His sets are eclectic and electric, he is a crowd reader and crowd pleaser!

Lyssa's history is a multicultural mosaic, with mumbled stories of mountains and rivers, to deep down dirty Mexico. What we know for certain is that she showed up in Victoria, BC in 2007 and weasled her way into our hearts with a deep rooted love for organic tribally latin rhythms, and classic funky and Chicago house sounds...

When these two get together, expect UNREAL amounts of fun, some flailing (by them!), and guaranteed good tunes to satisfy your bouncing needs!

started his DJ Career over 10 years ago in the Vancouver Nightclub scene, holding residencies at many of the top clubs in Vancouver as well as many after-hours venues and events. Playing everywhere from underground parties, to live radio and television, Kailem has adopted his own pliable style and is one of the most flexible House music DJ’s around. Playing an infusion of everything from House, Progressive, Vocal, Electro, Techno, and Tribal makes Kailem very versatile, Tailoring his Energetic Sets to his Audiences and Clubs. His style has graced countless dance floors and wowed thousands of club goers. With guest spots in other major urban centers, Kailem has carved out a niche for himself in the Western half of North America as a DJ of choice for any club event big or small.