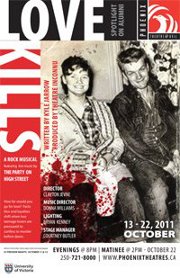 Based on the 1958 killing spree by Charlie Starkweather and Caril Ann Fugate that shook America to its moral core, OBIE Award-winning, New York playwright, Kyle Jarrow's critically acclaimed rock musical and psychological drama brings us inside the jail and inside the heads of two teenage lovers accused of murder. When interrogated by the town sheriff and his wife, facts blur and loyalties shift as the teenage lovers are pressured to confess before dawn. Advisory: Partial nudity, mature subject matter and strong language.

"… a compelling and entertaining production. Jarrow forces us to consider that spree killers are people too… he merely advocates for humaneness and open-mindedness. And that's never a bad thing."
Times Colonist

"Love Kills… and it rocks too!" "Go see it; you may not come out humming, but you certainly won't be disappointed." Monday Magazine (Top Pick, Nominated for M Award for Best Musical)

*The Spotlight on Alumni program invites our graduates to present their current work at the Phoenix Theatre.

FREE Pre-Show lecture: October 14 at 7pm
"Art and Violence"
Join Professor Emeritus Alan Hughes for discussion about our culture's fascination with stories of violence, both as an inspiration for art and those times when life imitates art. This pre-show lecture is free. All are welcome.

The Party on High Street (Funk)

other sites: cbc
Since finding each other in Nelson, B.C. seven years ago The Party On High Street has worked tirelessly to bring it's signature feel-good funk jams to the people! We are a lively dance-inducing mix of funk, folk and jazz fuelled rockn' roll, joyfully delivered and presented like a funbomb waiting to make you jive. Our band sings of peculiar youthfu... more info
Audio: Bonzai, Second Hand, Jazz
Videos:

The Party on High Street - Bonzai