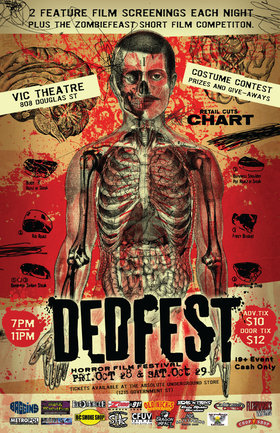 "MONSTER BRAWL" (Directed by Jesse Thomas Cook) Its what all us horror fiends, gore hounds, and deadheads have wanted since we were kids… monsters and wrestling together at last!

Eight legendary monsters – including Frankenstein, The Wolfman, and The Mummy – are pitted against each other in a fight to the death to determine the most powerful monster of all time! Starring Dave Foley (Kids in the Hall), Robert Maillet (300, Sherlock Holmes), Art Hindle (Porky’s, The Brood), Herb Dean (MMA Referee), Jimmy Hart “The Mouth of the South”, with Kevin Nash (The Punisher), and featuring the voice of Lance Henriksen (Aliens). It’s the Ultimate Fight of the Living Dead! http://www.youtube.com/watch?v=HqGIAkd5tYw

"ZOMBIE" (Lucio Fulci) Strangers looking for a woman's father arrive at a tropical island where a doctor desperately searches for the cause and cure of a recent epidemic of the undead.