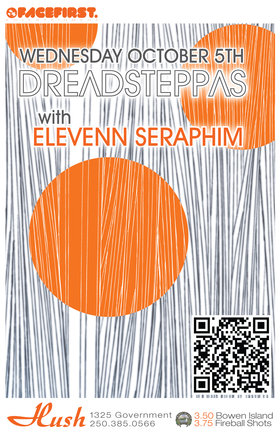 The Dreadsteppas are Victoria's premier natty trio of sonic destruction. With over 15 years of combined experience, Dezine, Okibi, and Spoon bring a proper selection of bassweight tunes to every set. Utilizing turntablism, double-drops, mashups and a slew of effects, the Dreadsteppas are a unique and high-energy act. With a growing monthly at Hush Nightclub (now running for over a year) and numerous shows around the Island, the Dreadsteppas have generated a substantial following. No other crew rinses out dubstep and drum and bass like the Dreadsteppas!

Elevenn Seraphim is a unique musical experience. It is a ferocious blend of dubstep, glitch and hiphop. Using the classic formula of DJ and turntables, Elevenn uses conscious darkness slathered on psyche shattering beats to save the masses from their bleak everyday lives. Seraphim is the result of a powerful individual finding the beauty in the struggle and using every watt to ravage every ear within range. Living on the edge in Victoria BC, she has been given a divine right to do this.

Elevenn is almost too much to deal with. As a DJ, she is personally responsible for ushering in the Dubstep scene in Calgary. Having found her soul in the sheer filth of Dubstep in 2006, while most other DJ's were busy growing hair in strange new places, Elevenn made it her personal mandate to pwn the scene's largest parties and give the kids something fresh. A skilled turntablist, with a true gift for reading the crowd's energy, her sets leave people in a sweaty satisfied mess. Elevenn on the decks is a gothic dark empress with a soft touch and an iron fist. Dub chub may occur, be forewarned.

So this is 2011 and everybody better hold their ankles, cause the sky is about to bleed. The studio is up, the tables are spinning, the mic is armed and the volume is making doctors nervous. The album is coming. Seraphim is crafting a sound scape that even the Sandman couldn't dream up. There are wet bibles and exploding pianos in the sample bank and that's just the beginning. Elevenn is a talented producer and has been creating beats and honing her craft into excellence for the past few years. Keep your ears open as the process continues. But, oh no, don't think that it stops there. Seraphim is taking this to your front door. Performing all over Pacific Northwest and internationally, know the name so you can stay up to date, I mean, who doesn't want to have their face melted off?

Elevenn headlined alongside shows with other demigods such as: Caspa, Aquasky, Subvert, Benny Page, Excision, Ill-esha and DJ Swamp to name a few, and she's rocked shows and festivals across the country, from Montreal to Victoria and everywhere in between. The experience is like no other. A new age is upon us. Hark, hear the Seraphim sing.