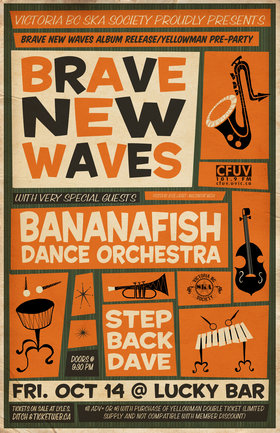 Friday, October 14th come out to Lucky Bar to party with three of your favourite Island ska/reggae/Latin bands. It's the first time that all three of these bands have been on the same bill.

You all know Brave New Waves from going to sweet shows with them playing with bands like Rootz Underground, Chris Murray & Jon and Roy among many others. You also may remember that they were in Vancouver a lot this past spring working on a new album. Well, now it's time for them to show the fruits of their labour. They will have their new 23 song album available at the show and this show will celebrate it.

Bananafish Dance Orchestra are a high energy 8-piece Latin/ska/funk/jazz ensemble. They've also played on some nice festivals including the Victoria Ska Festival and Vancouver Island Music Festival. Their last appearance in Victoria was with The Klaxon from Bogota, Colombia and Mexico's Mama Pulpa.

And finally Step Back Dave (who often play with label mates Everybody Left) will round out the bill. Step Back Dave bring an honest and ambitious voice to the Island's Leftcoast Ska/Reggae influenced scene. Nick & Dan have been playing together since they were kids and they were joined by Ethan in time to begin recording their debut album. After a studio theft and 10 songs were lost, the self-titled 3 song EP was released. SBD teamed up with their friends at Outer City to help with distribution.