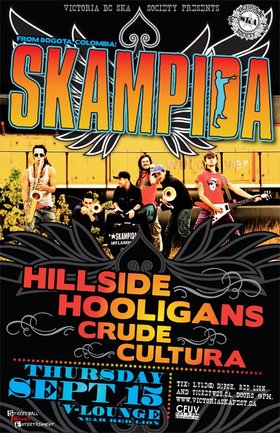 SKAMPIDA went back to Colombia after their Colombia to Columbia tour to commit to play at Rock Al Parque - one of Latin America's largest annual festivals --- > but now they're back in North America on the west coast and they're ready for a come warm Canadian hospitality.

HILLSIDE HOOLIGANS are also ready to rip this show after coming off playing with The Planet Smashers and Australia's The Resignators at Victoria's 12th Annual Ska Festival at Market Square. In case you haven't heard the band is bursting out the seams with new phat material. DIRTY REGGAE, catchy grooves and danceable tunes non-stop. With the dawn of a new Hillside Hooligans due later this fall the members have found even more inspiration after building on a recent string of press leading up to the Victoria Ska Festival. Notably Ky-Mani Marley & Gramps Morgan's crew knew the band;)

CRUDE CULTURA was a band that was created from creative passion and a once in a life-time opportunity to perform with Fishbone's Angelo Moore (aka Dr. Madd Vibe) in Halloween of 2010. The band plays Latin, funk, ska, reggae and hip hop mixing all the genres beautifully.Nostic and Felicia bring soul and a Latin/hip hop flavour to the band not found in any other band on the Island. The band consists of members from both Rocky Mountain Rebel Music & Divine Element.