As a May Long treat Surge welcomes: Sunhawk: After attending Sasquatch Music...

Modern Rock from Victoria BC
Unknown

Promotions from Victoria, BC
Open / Operational

As a May Long treat Surge welcomes:

Sunhawk:
After attending Sasquatch Music Festival '09 and wishing, band after band, that they were on stage playing to thousands of enamoured fans, friends Matt Longpre, Ben Robertson and Keenan Murray drove back to their home town of Victoria, BC and started Sunhawk, the next day … actually.

...The trio started writing together during the summer of 2009, using Matt Longpre’s living room as a space for rehearsing, recording, eating, sleeping, etc. Entering 2010 the group began gigging in Victoria, playing many of the cities prominent venues, as well as the Sub-Zero Skim Jam ’10 on the west coast of Vancouver Island.

Most recently, the trio released their debut EP ‘And So It Was’, playing a sold out release party at Victoria’s Lucky Bar on March 18, 2011. From here, Sunhawk is looking forward to further promotion and potential touring on their debut.

That being said, Sunhawk will not be coasting on their sole release. The trio re-entered the studio in April 2011, beginning recording of several new songs which will be destined for release, and potentially music video production, later this year.

Society- first as our parents, friends, and peers, then as the media, our teachers, and our bosses at work- already has plans for us. We must fit into the social design of past generations. We are pushed into this mold until we don't know our true selves. Eventually, we reach a tipping point and something must change. Wolfheart is born of the need to find the animal within, the other side of yourself that has been buried under the weight of society, and unleashing it. 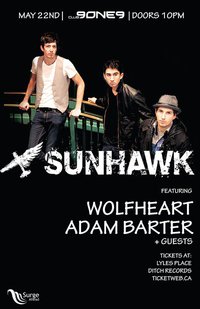