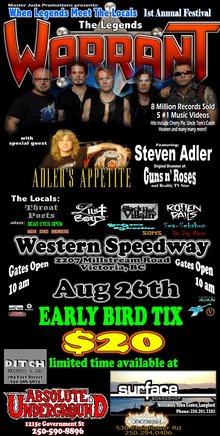 Music: Funk / R&B, Pop / Rock / Indie, Punk / Metal / Hardcore, Reggae / Ska / Dub
Hey Peeps for you parents wanting to come to the show but don't want to shell out a fortune in Babysitting CHILDREN UNDER 10 ARE FREE!! and YES THIS IS AN ALL AGE EVENT BUT THERE WILL BE A LICENSED AREA FOR THOSE ADULTS WHO WANT A FEW POPS!! but must be accompanied by an adult of course!!! So a few more hours to grab your tix in the noted stores!!

This summer Master Joda Promotions and High Tide Entertainment are going to take us back to the days when pants were tight, scarves were an accessory and rock wasn't someone whining about what they have or have not got. A time when rock was about putting on the best possible show for the fans. A time when it was okay to lose yourself in the fantasy of rock stardom. A time when it was okay to indulge in that guilty pleasure! Where the woman had big hair and... the performers had even bigger hair. A time of great fun. Well it is time to bring the fun back and to bring the house down with a couple of Legends from that great time.... Master Joda Promotions is proud to present:

With a pair of double-platinum albums, Warrant was and still is one of the most popular rock bands of the late '80s. Formed in Los Angeles in the mid-'80s, the group's live show carried them through many changes in the music world. They released "Dirty Rotten Filthy Stinking Rich" in 1989; by the middle of that year it had climbed into the Top Ten and launched the hit singles "Down Boys," "Sometimes She Cries," and "Heaven," which reached number two (Only to be knocked down by the infamous Mili Vanilli). As bassist Jerry Dixon quotes "We like to think 'Heaven' was a number 1.5 hit single".

Next up was the band's 1991 release of Cherry Pie, which not only broke the sophomore jinks but shattered it. Cherry Pie yielded the band 3 Top Ten Hits, 3 number one MTV videos and more platinum albums. Cherry Pie featured the now classic songs "Uncle Tom's Cabin", "I Saw Red" and "Cherry Pie." Their third album, Dog Eat Dog, released in the midst of the Grunge takeover, managed to hit Gold status. In true Warrant fashion they continue to make viable records that include "Belly To Belly", "Ultraphobic", and the 2006 release of "Born Again". Look for their next studio release in 2011.

Many bands have come and gone over Warrant's 21 years as a professional recording artist, but one thing remains: Warrant is here to stay and is now better than ever! http://www.warrrantrocks.com
http://www.armentertainment.com/warrant/index.html
http://www.myspace.com/warrantband
http://www.facebook.com/pages/WARRANT/125089977508792
http://itunes.apple.com/artist/warrant/id506268

Steven Adler, best known as the original drummer of “GUNS N' ROSES”, one of the most influential, ground-breaking hard rock bands to emerge from the late-80's L.A. hard rock scene, has returned to pick up where he left off.

Steven decided to redefine "Adler's Appetite" and put together what both fans and critics have called the strongest line-up of the band to date. “Adler’s Appetite” consists of veteran and platinum selling artist Chip Z'Nuff (Enuff Z'Nuff), guitarists Alex Grossi (Quiet Riot) and Michael Thomas (Faster Pussycat), and Rick Stitch on vocals from LA band "Ladyjack".

with nothing short of a stellar response, “ADLER'S APPETITE” is giving the fans what they want and breathing new life into the legacy that is “GUNS N' ROSES”.

brought to you by

Lineup subject to change without notice 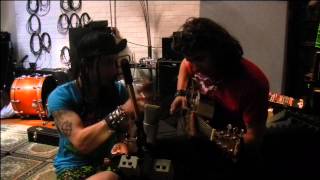 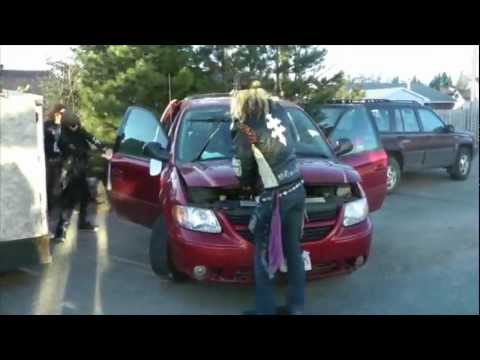 Throat Poets are a hard rock trio from Vancouver Island Canada, who have been laying down their own brand of heavy melodic grooves since 2009. Big things have been in the works for Throat Poets since befriending, Canadian Rock Royalty Alan Anton of Cowboy Junkies fame and legendary producer Garth Richardson (Rage Against the Machine, Mudvayne, Chev... more info
Audio: Portable Altar, Shuffle Blitz, Rebirth

other sites: myspace
Weak Patrol is, for all intents and purposes, a rock band... A FIVE PIECE, HIGH ENERGY, SWEAT TILL YOU REEK, EMOTIONALLY CHARGED, TONGUE IN CHEEK, BREAK A STRING, PLAY FOR A CAR DOOR OPENING, LOSE A STICK, POP YOUR SNAPS REPEATEDLY IN ONE SHOW, rock band. more info

Check out our Myspace or Reverb. For the Downlow! more info
Submit info on this show to our admins