The Penthouse Vancouver BC

***CONTEST CLOSED & WINNERS HAVE BEEN NOTIFIIED - Thanks to everyone who entered...

The Penthouse (No Minors)

Punk / Blues from Vancouver BC
since circa 2001

***CONTEST CLOSED & WINNERS HAVE BEEN NOTIFIIED - Thanks to everyone who entered - pls check the GIVEAWAYS link for more chances to win!***

SPM Music has kindly given us 2 pairs of tickets for the following event:

so ENTER TO WIN free passes for you and a friend!

- Leave us your FULL NAME (as it appears on your I.D.)

- Leave your PHONE NUMBER where you can be contacted on Friday, December 10.


***
Contest closes at 10am on Friday, December 10.
One entry per account please.
Winners are selected by random draw.
Winners must respond by 3pm on Friday, December 10, or tickets will be forfeited and offered to the next eligible entry. The first entrant will have no further claim to the prize.
Contestants must allow us the right to publish their names if asked.
We reserve the right to cancel or modify any contest or contest rules at any time without notice, and are not responsible for any errors, damage or negligence that might occur in connection with the contest, including technical failures, the acts of the promoter or venue, or show cancellations.
Prizes are awarded as is and there are no warranties or guarantees, implied or expressed.
Further, we reserve the right to substitute any prize or portion of the prize with a prize or prizes of equal or greater value.


Big John Bates and Voodoo Dollz roll into Vancouver with the 16 Rounds tour at the famous Penthouse Night Club for a highly anticipated performance on Saturday, December 11th. The tour includes guests “White Cowbell Oklahoma” and introducing from Toronto, “The Schomberg Fair”.

More than just a great night of music, this will be a special birthday party for the one and only Big John Bates, as he celebrates on stage with the Voodoo Dollz, close friends and tour sponsor Jagermeister Music.

The 16 Rounds tour will travel across the country for this final Vancouver performance, which promises to be a memorable night of high energy roots and rock from three reputable Canadian bands. Come share in the party as we throw Big John Bates the ultimate Rock ‘n’ Roll Birthday Bash!

Advance Tickets Available at The Fall Tattoo or online at www.Ticketweb.ca

Big John Bates is a punk /blues group from Vancouver led by John Bates, a Gretsch-endorsed guitarist who "mixes punk & blues" with an increasing influence from southern gothic / circus styles of Americana. They were also the first rock'n' roll band to add Burlesque performers (the Voodoo Dollz) as part of a synchronized live group. www.bigjohnbates.com


About The Schomberg Fair.

This past year has seen The Schomberg Fair touring everything from dive bars to major festivals across Canada and the United States, sharing stages with Canadian indie stars (The Sadies, The Handsome Furs, Slim Twig, The Pack AD), international imports (The Oholics), and even 85-year-old blues legend T-Model Ford. Look for them as they cross Canada once again this fall.
www.theschombergfair.com/ 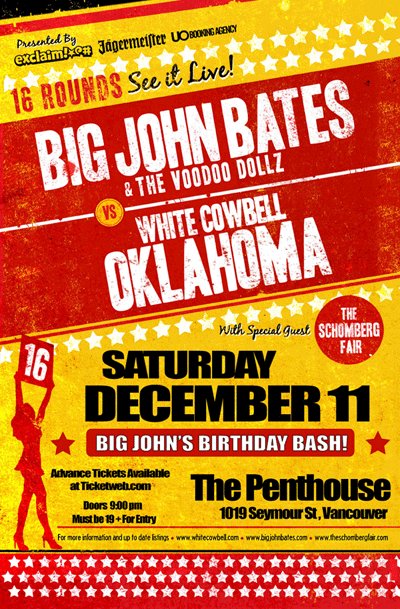