Singer/Songwriter from Vancouver BC

Pop/Rock/Indie from Vancouver BC
Unknown

The HARVEST - Spawned in Victoria, The Harvest quickly relocated to Vancouver after realizing that sandalwood and politics weren't in the cards for them. Their sound is a mix of punk ethics, D.I.Y. personality and genuine passion for great music in a variety of styles from hard rock to blues and ska. While maintaining a steady regiment of songwriting, recording, shows and rehearsals, they've now opened a new home base in their own Aurora Studios where they're currently finishing work on their forthcoming second CD. http://www.myspace.com/myharvest

The CARNIVAL BAND is a community music project with ten years of history, based out of Commercial Drive's Britannia Community Centre. With a floating membership of around 30 people playing brass, woodwinds, accordions, percussion and stringed instruments, their monstrous repertoire includes samba, calypso, swing, afrobeat, jazz, funk, disco and traditional music from around the globe. They've played around the globe including Shanghai and a spontaneous performance in London, England that lead to the internet phenomenon of "Traffic Wardens Need Love", based around a YouTube video of the Carnival Band serenading traffic wardens. Their music is grounded in both collaboration and empowerment to all involved. http://www.myspace.com/thecarnivalband

MATTHEW MEI with YOU BRIGHT MINDS - Having traveled the world as the son of a preacher man, Matt's initial introduction to the world of music was his dads classical, old blues and folk records, but it was his struggles in life and his soulful growth that fueled his desire to write emotional and heartfelt songs. Matt teamed up with Jonathan Anderson (Jonathan Inc.) at Buena Vista Studios to create a thoughtful album that showcased some of his favorite songs he had written over the years. http://www.matthewmei.com 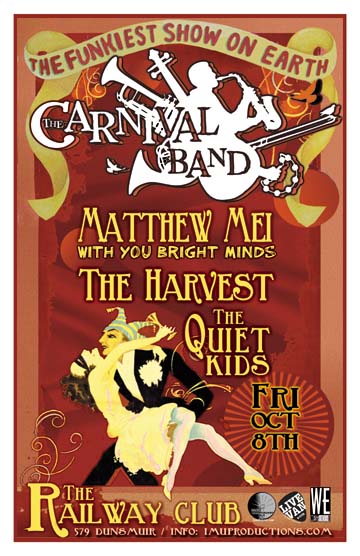