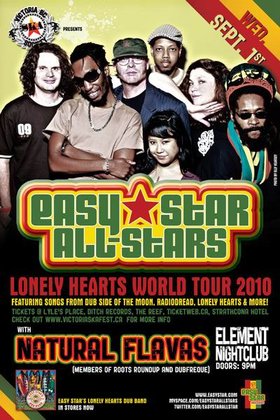 
After two sold out club shows and an epic co-headlining spot at Victoria's 9th Annual Ska Festival with The Skatalites - Easy Star All Stars have come back for more this September 1st in Victoria. The band will feature recently Billboard hit albums such as Dub Side of the Moon (based on Pink Floyd's Dark Side of the Moon) and Radiodread (based on Radiohead's Ok Computer). But much of the show will showcase material from their most recent album Lonely Hearts Dub Band (based on The Beatles' Sergent Pepper). The show will also feature a lot of the band's original material (i.e music from their all original EP Until that Day.

Joining them on the bill will be Vancouver's reggae juggernauts NATURAL FLAVAS who are consisted of members of both Roots Roundup and Dubfreque! You may remember them from when they opened up for Inner Circle earlier this year at Pepperpot's 9th Year Anniversary Bash. Solid night of reggae all around. Get tickets asap!

The Easy Star All-Stars are a collective family of some of the finest reggae musicians in the New York area. The band features a rotating cast drawn from a talented pool of players, meaning that every show has its own nuances and its own life. The masterminds behind the All-Stars are Easy Star musical director Michael Goldwasser (a.k.a. Michael G),... more info
Audio: Climbing Up the Walls, Karma Police, The Great Gig in the Sky

other sites: myspace
NATURAL FLAVAS is a unique project , simultaneously an original band while also working as a backing band for touring artists. Under their own name Natural Flavas produces original reggae that parallels the current Jamaican scene while remaining uniquely Canadian. They’ve gained quite a reputation locally , opening for Toots & The Maytals , Inner... more info
Audio: Time
Articles: In Your Facefest!
Submit info on this show to our admins