Better Late Than Never Productions in conjunction & the Skinny Magazine would li...

Better Late Than Never Productions in conjunction & the Skinny Magazine would like you to please join us in welcoming one of our native sons back to Vancouver for a night of punkpoprockandroll awesomeness!

At the newly renovated

NEW BRANDIZ
122 e Hastings
(In the heart of the east side! A stones throw from JJ's early punk rock home, the Smilin Buddha!)

From the man himself:

Back in 1981 (when I was 16) I joined Dayton, Ohio's hardcore punk rock Band "Toxic Reasons" after their drummer (Mark Patterson) quit the band. They were stuck in my Home town of Vancouver Canada without a drummer and a bunch of shows booked up and down the west coast. I had been playing drums in a couple of local bands "No Exit" & "Bludgeoned Pigs" (Playing both nights of the now infamous "Hardcore 81" Shows with D.O.A) and I was a Drum Roadie for several Vancouver drummers including punk rock legend Chuck Biscuits (D.O.A., Circle Jerks, Black Flag, Danzig, Social Distortion), Zippy Pinhead (dils, Los Popularos) & Dimwit (Subhumans, Pointed Sticks, The Four Horseman). Joe Shithead Told the Toxic's about a little kid who was a pretty good drummer (me) so I jammed with them a couple of times, we played a show at the "Smilin Buddha" (a sleazy old bar on Hastings & Main in Vancouver) then I hopped in the van and never went home. I was able to travel the world!!!

With help from my one of my best friends Hannes from the German Band K.G.B who was able to mastermind several tours around Europe and from 1984 to 1995 we kicked ass and took numbers in 12 countries releasing 8 lps and countless tapes and compilation albums. My liver and my heart will never be the same but I wouldn't change a thing. Over the years of playing with Fuck Bands, touring, jamming, and what not I picked up the guitar and bass so I started writing songs and although the "boys", (the guys in Toxic Reasons) thought the songs were good, they just weren't TR material. At first I got pissed off, but then I just thought, "Fuck'em", I'll save these tunes & do my shit on my own!

So I recorded 12 songs where I play all the instruments & Vocals at Hit City Recording Studio,with my Buddy Tim Brickley. 2 of the songs "I got you caught in my eye" & " Feeling not alright" were "Germs" covers and were featured on a tribute album called "Strange Notes" on Germany's " Bitzcore " label (Thanx Jurgen Goldschmidt)... So here it is! Once again I'm spilling my guts!!! This is my vehicle to stardom, my solo project, my way to be the boss, look out a drummer as a front man!! (but I've always said) "I'm a guitar player trapped in a drummer’s body". I've been out gigging when I can (with the help from the D.I.Y network) playing shows around town, and some out of state gigs and I'll play for just for the love of the rush I get just playing. I'll keep doing it (just 'cause I can) and until the need and ability to show off leaves me. Enjoy if you will, but let me know what you think regardless...x.o.x.o. J.J.

RAFR! from Vancouver BC
Unknown

from Vancouver BC
since circa 2007 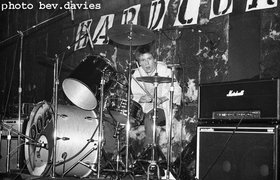