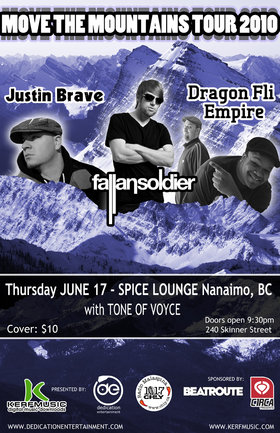 Music: Funk / R&B, Hip Hop / Rap
Get ready to enjoy a full night of some of the finest Canadian hip hop when the MOVE THE MOUNTAINS TOUR 2010 touches down in Nanaimo, Thursday June 17 at Spice Lounge.

This is a show you don't want to miss featuring Fallan Soldier, Dragon Fli Empire, Justin Brave and Tone of Voyce.

Western Canada has a strong and vibrant indie urban music scene with talented artists and great performers but sometimes the mountains get in the way. MOVE THE MOUNTAINS is focused on bringing together the best in western Canadian hip hop/rap and presenting it to you...live!

Come on out and party!

Harris Allan is Fallan Soldier, “an exemplary singer-songwriter…specializing in hard-hitting beats and genre-mixing tracks…with inventive lyrics and unique vocals” (AnE Vibe). His debut album “Above The Call Of Duty” is “fresh, upbeat and exceptional…Overall, a great piece of work” (NXEW). “If you haven’t heard of Fallan So... more info

Heralded over time as one of Western Canada’s leading hip hop voices, Justin Brave’s goal of creating conscious, quality music has never wavered. From paying his dues streetwise in countless freestyle battles to collaborations with the likes of the Lifesavas, DJ Vadim, Swollen Members and Moka Only, Justin has proven his ability through and thr... more info
Submit info on this show to our admins