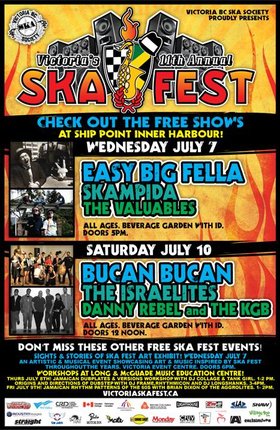 Music: Folk / Celtic / Latin / World, Jazz / Blues, Reggae / Ska / Dub
This will be a awesome afternoon with four bands that will be making their debut at Victoria's 11th Annual Ska Festival.


First Bucan Bucan will awe our audiences with their unique blend of traditional eastern European gypsy music. The music and transforms into a crazy party; filled with many instruments, theatrics, moustaches, fishnets and fur! Made up of over a dozen circulating musicians each having their own unique musical performance background, ensembles and projects, and all together they bring a wonderful spirit to the group!


The Israelites are a veterans to North America's ska/reggae scene. Born out of California and transplanted to Oregon this band knows how to play traditional ska/rocksteady/reggae tight!


Danny Rebel & the KGB hailing from Montreal blend ska, soul and reggae into one. The band has shared the stage with such acts such as The Slackers, Westbound Train and The Planet Smashers. With a DEBUT "Soul Shaker EP" due to hit the streets and ears in Spring 2010, Danny Rebel promises to "Take no prisoners & leave no booty unshaken," while the K-G-B vow to do "Whatever is necessary" to instill rhythm on the island of Montreal & the ends of the Universe.

The culture of ska runs deep and is inseparable from world culture. The Israelites demonstrate this. Jamaican ska pioneer Desmond Dekker named an album Israelites in keeping with the Rastafarian tradition that likens people taken from Africa as slaves to another dispersed people who regard Israel as their true homeland. Since 1989, the Israelites h... more info
Audio: Shanty Town, Temptation

Danny Rebel & The KGB are one of Canada’s most exciting acts today. They have performed all over Canada including Sled Island, Stampede, the Montreal International Reggae Festival, and both the Victoria and Montreal ska Festivals. They’ve played alongside The Planet Smashers, Fishbone, The Slackers, and many more! Their unique blend of reggae, ... more info
Audio: Brazillian Top 10, Walkin Home, Soul Shaker
Submit info on this show to our admins