TICKLE ROCK! from Vancouver BC
Unknown

The INTRUDERS are a rock and roll band. They dig Delta & Chicago blues, 60s garage rock, southern rock, British Invasion, acid-rock and early punk. After a summer of writing, touring, and playing festivals around the interior, they moved to Vancouver and have just finished recording their new LP 'Half Cut' at The Farm Studios. The Intruders are geared up for bringing some real rock and roll to Vancity in 2010! http://www.myspace.com/IntrudersOfficial

TROPHY WIFE put the mental back in instrumental, combining blistering riffs, funky bass and rhythmic beats into an intensely contagious blend that has hooked fans at venues throughout Vancouver. It's hard to pin down their mix of rock, funk, metal and blues, but they've steadily made believers out of legions of people who simply didn’t know they would like an instrumental act until they heard Trophy Wife. Foregoing a singer and the desire to be conventional or mainstream, Trophy Wife steals all the glory for themselves by dazzling ears, pleasing eyes, moving asses, melting faces and doing other unmentionable things to every other body part you can think of! http://www.myspace.com/TrophyWifeBand

ELEPHANT TRAIN has been around for nearly two years, gaining a respectable following by playing shows throughout Vancouver. Their sound touches on a wide variety of genres and styles, combining funky licks that make the girls cry with a solid, lickity-split havoc that brings out the boogie in people. Quickly gathering speed with a new EP of studio recordings, Elephant Train delivers a strong, enthusiastic live show full of funky, original rock. http://www.myspace.com/elephanttrain 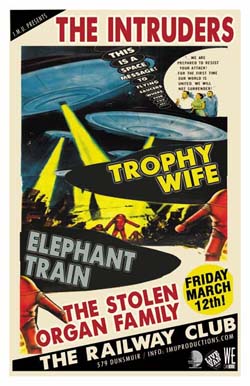