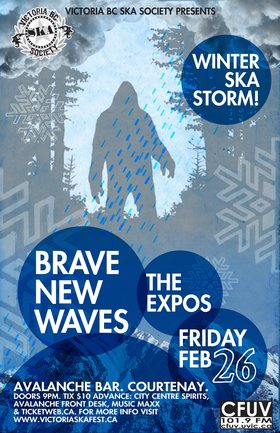 We're calling this one Winter Ska Storm (thanks to Eli of Brave New Waves for coming up with the name). More ska in Courtenay is a good thing and we're happy to bring The Expos (Stomp Records Artists) that came previous to Victoria opening for One Night Band. The Expos are now touring in support of their new album "Blackwater" which is full of nice rocksteady and reggae. And to top it off Brave New Waves from Victoria will be bringing down the house with their own Island brand of reggae/surf/ska. Paarty paarty must we say? This is a great opportunity to get out of town for a night and then come back down to Victoria for Chris Murray at Lucky Bar two days after this show.

The Expos are made of up musicians from Toronto’s eliete (including Makeshift Heroes which appeared at Victoria’s 6th Annual Ska Festival back in 2005). Their music has reggae, rocksteady and jazz influences. The band is touring on release of their new album on Stomp Records released this August 2006! more info
Submit info on this show to our admins