from Vancouver BC
since circa 2008

The CARNIVAL BAND is a community music project with ten years of history, based out of Commercial Drive's Britannia Community Centre. With a floating membership of around 30 people playing brass, woodwinds, accordions, percussion and stringed instruments, their monstrous repertoire includes samba, calypso, swing, afrobeat, jazz, funk, disco and traditional music from around the globe. They've played around the globe including Shanghai and a spontaneous performance in London, England that lead to the internet phenomenon of "Traffic Wardens Need Love", based around a YouTube video of the Carnival Band serenading traffic wardens. Their music is grounded in both collaboration and empowerment to all involved. http://www.myspace.com/thecarnivalband

WALTZ DARLING have entertained local audiences for years with their crazy musical journeys. Sustained by their passion for all styles of music, their Eastern European roots have always been woven into their songs. Atila is Hungarian while his cousin Robert hails from just across the Serbian border. Their disagreements are the stuff of legend and high comedy. Rich's background is Polish and German, while Michael's grandparents were Russian Jews who ran from pitchfork-wielding neighbours. http://www.myspace.com/waltzdarling

DANNY ECHO - Since the formation of Danny Echo, the Vancouver music scene has embraced the vibe of their rock and rollio presence. With influences drawing from greats like the Rolling Stones, The Who, The Beatles, Radiohead, Oasis and U2, Danny Echo reverberates with all that is melodic, all that is catchy, and all that is rock and roll. With bucketloads of experience in the music and film industries under their belts, they've taken their songwriting, recordings, and live shows to the next level, with smoke machines, projectors, smoking guitars and fire extinguishers (?!!) enhancing the visual assault of their gigs. Their catchy tunes have been implanted in a number of media outlets including Cold Squad, Just Cause, Show Me Yours, Saint Monica, CBC and MuchMusic. http://www.dannyecho.com

BRIANA STEWART & The MAD MAN'S GOSPEL - Briana Stewart and her band blend an eclectic mix of blues, rock, jazz and pop with styles inspired by the '20s and '30s Jazz/Blues era. With a warm and intimate voice, playful yet raw lyrics and tales of the turmoil of love, you'll find yourself singing her contagious melodies. Briana's passion for classic blues artists like Billie Holiday, BB King and Otis Redding has helped with translating her poetic writing and melodic singing skills into memorable songs. Expect big things from this dynamic quartet in the near future! http://www.myspace.com/brianastewartmusic 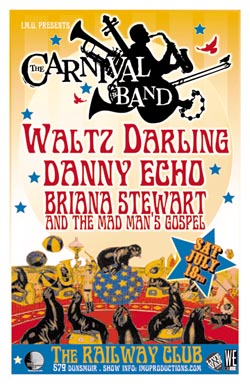