TICKLE ROCK! from Vancouver BC
Unknown

The MIDNIGHT JEZEBELS play bar room rock n roll with dirty influences: The Faces rolling with The Stones and flying high with Humble Pie. These rockers know only one thing: you give respect to the craft if you learned that it ain't all about the money. It takes years of crawling through the successes and heartaches of the music industry to bring a true sound forward now. Have a drink and turn it up loud. CHEERS! http://www.cdbaby.com/cd/mjezebels

TROPHY WIFE put the mental back in instrumental, combining shredding guitar solos, funk bass, Latin rhythms and jazz-classical piano into a contagious blend that has garnered fans at venues like The Roxy, Media Club, Buffalo Club and Columbia. Comprised of Louie Anyos, the most unsung guitar hero on the planet, Darryl Greer on bass, the funkiest white boy on the planet, and the hairiest, most rocking drummer on the planet, Pablo Stolowicz, Trophy Wife is prog-rock in it's most virtuosic and shamelessly entertaining form. Foregoing a singer to steal all the glory for themselves, Trophy Wife aims to dazzle the ear, please the eye, move the ass, melt the face and do other unmentionable things to every other body part you can think of. http://www.myspace.com/trophywifeband

ELEPHANT TRAIN has been around for nearly two years, gaining a respectable following by playing shows throughout Vancouver. Their sound touches on a wide variety of genres and styles, combining funky licks that make the girls cry with a solid, lickity-split havoc that brings out the boogie in people. Quickly gathering speed with a new EP of studio recordings, Elephant Train delivers a strong, enthusiastic live show full of funky, original rock. http://www.myspace.com/elephanttrain 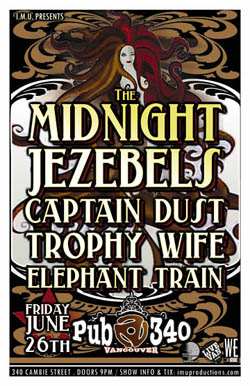