THE RETURN OF THE GREATEST ROCK BAND IN THE WORLD!: Supersuckers, Big John Bates...

THE RETURN OF THE GREATEST ROCK BAND IN THE WORLD!: Supersuckers, Big John Bates & the Voodoo Dollz, The Spitfires

SUPERSUCKERS BEEF UP THE SHOW! BIG JOHN BATES & THE VOODOO DOLLZ ADDED TO THE B...

SUPERSUCKERS BEEF UP THE SHOW!
BIG JOHN BATES & THE VOODOO DOLLZ ADDED TO THE BILL
Thursday, July 24th at the Plaza Club, 881 Granville St., Vancouver
Advance tickets $20 at Ticketmaster & Zulu Records or $25 at the door.

It is a big music week in Vancouver – but you don’t have drive for hours out of town to catch this one. This is the pre-Pemberton psycho-fest of rock, roll and burlesque.

Yes boys and girls – Thursday, July 24th is the day that 99.3 The FOX and Rock.It Boy Entertainment present the return of Arizona crazy men SUPERSUCKERS a.k.a. ‘The Greatest Rock & Roll Band in the World’ with special guests BIG JOHN BATES & THE VOODOO DOLLZ plus THE SPITFIRES at the Plaza Club.

Local mayhem rockers CRYSTAL PISTOL are no longer on the bill – because they are no longer in existence. Stepping up to fill the void is BIG JOHN BATES & THE VOODOO DOLLZ. This is an act that packs out clubs in North America and Europe alike. They astound, they stupefy, they scare, they enrage, they titillate, they entertain and they just plain shake the psychobilly rock and blues world till there aint no shakin’ left.

Every night is Saturday night for BIG JOHN BATES. It all started in Vancouver in 1999 at the end of the century and the turn of the new millennium when the notorious Mr Bates hit the stage and the airwaves with albums like Vibro-Psychotic, Flamethrower, Mystiki and Take Your Medicine. Labelled as ‘hotrod blues’ or ‘psychobilly noir,’ and fuelled by a Jagermeister endorsement, they rip up the stage with permanent weekend energy that embodies all of the myths and taboo of the American underbelly, and all that rock & roll threatened to be but never was.

To balance out the overly macho frenzy of J.T. Brander on drums and the swaggering blond of Bates up front, there is the feminine side of the band - feminine, but not so sweet, and definitely not demure. The scantily clad, bespectacled sCare-oline hauls her stand-up bass on stage rides it, twirls it, slaps the notes out and generally does all the things that Charlie Mingus never did to a big bass fiddle.

Then – to top the spectacle off, THE VOODOO DOLLZ, Little Miss Risk and associate Lola Frost, join the frenetic trio with their dance and sideshow act that parallels the melodies blasting from the stage.
They cavort around the stage juggling fiery batons‚ jumping up and down in such a way their well-placed tassels spin clockwise‚ then counter clockwise. They tease and tantalize with their sometimes scantily clothed‚ sometimes topless burlesque antics carefully concealed by an array of feathers. A fun time is guaranteed for all!!

ROCKED THURSDAYS at the Plaza Club is not for the faint of heart! 99.3 The FOX and Rock.It Boy Entertainment present SUPERSUCKERS in concert with special guests BIG JOHN BATES & THE VOODOO DOLLZ plus THE SPITFIRES on Thursday, July 24th at the Plaza Club, 881 Granville St in Vancouver (phone Ph 604-646-0064).. Advance tickets are available for $20 at all Ticketmaster outlets (online at http://www.ticketmaster.ca or Charge-by-Phone at 604-280-4444) and Zulu Records or $25 at the door. Doors open at 9:00PM.

Punk / Blues from Vancouver BC
since circa 2001 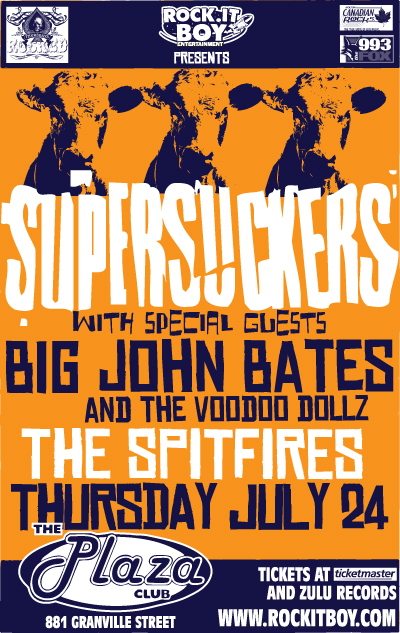