from Vancouver BC
Un-Available: Writing/Recording

we fit into everything rock from Vancouver BC
since circa 2004

Physical tickets at: I.M.U. Productions, via the bands

TENANT is an aggressive, progressive, and impressive heavy rock quartet based in Vancouver. Recorded at the famed Mushroom Studios, they launched their much-anticipated debut CD "All My Favourite Bands Are Breaking Up" with a sold out show at the Media Club, bringing their high energy live performances back to local fans. Every Tenant show is an opportunity to be amazed and entertained; their extremely heavy grooves and catchy melodies leave audiences humming and headbanging long after Tenant leaves the stage. Not a band to miss! http://www.tenantband.com

splitTRACT - Fronted by singer/songwriter Chris Witoski (formerly of Art of Dying), splitTRACT's dynamic hard rock grooves with melodic overtones have been buzzing a lot of ears. Their tight, rhythmic and pulsating songs have landed them premier shows with bands including The Trews and Default as well as festival showcases like Canadian Music Week. Their sound can be described as dark rock with influences that include bands such as Tool, A Perfect Circle, Chevelle and the Smashing Pumpkins. http://www.splittract.com

The GLIM PROJECT is a full out rock band; a unique, hyper-energetic mish mash that cannot easily fit into one category in today's rock scene. Too progressive to get radio play, not progressive enough to be considered prog rock; too loud and aggressive for the hipsters, but not enough for extreme metal heads. Furious guitars loop around heavy percussive drumming, while galloping bass riffs cut right down the middle. Visually, it's quite a feast, as the band pours out every bit of energy they have in bringing their creations to life. http://www.glimproject.com 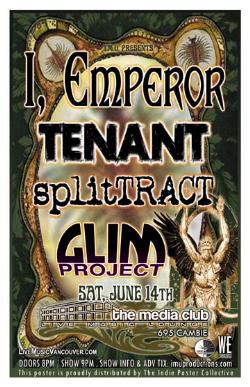