GLIM Project, InAffinity, MADE IN MIND

The Bourbon Vancouver BC

GLIM Project, InAffinity, MADE IN MIND

The Bourbon (No Minors)

we fit into everything rock from Vancouver BC
since circa 2004

Hard Alternative Indie Metal Rock from Vancouver BC
since circa 2006

The GLIM PROJECT is a full out rock band; a unique, hyper-energetic mish mash that cannot easily fit into one category in today's rock scene. Too progressive to get radio play, not progressive enough to be considered prog rock; too loud and aggressive for the hipsters, but not enough for extreme metal heads. Furious guitars loop around heavy percussive drumming, while galloping bass riffs cut right down the middle. Visually, it's quite a feast, as the band pours out every bit of energy they have in bringing their creations to life. http://www.glimproject.com

INAFFINITY is a developing collective of musicians who place no limits on their creativity, seeking the wall of sound that encompasses everyone when they hear a great song that makes the hair stand up on the back of their neck. From rock to metal, from hip hop to electronica, music rules are meant to be broken and these guys are doing it. As songwriters, singers, guitar players, drummers, keyboard players, producers and visual artists, this collective is really taking its own unique shape. One part emotion + one part style + one part groove + one part drive = InAffinity http://www.myspace.com/inaffinity

MADE IN MIND - With the 2005 release of their debut album "Are You Okay?" and the hit single "It Makes Me Happy", Made In Mind have been played on every major Swiss radio station and ranked fifth in national airplay. Originating from Luzern, Switzerland, this five-piece group delivers a dose of genuine emotion, while lead-singer, Vreny Stadelmann's unforgettable voice forms the power and soul of the band. Thought-provoking lyrics and brilliantly-constructed choruses are intelligently arranged. An experienced live band, Vreny impresses with her voice and the band provides a cool, powerful and intelligent support. http://www.myspace.com/madeinmind 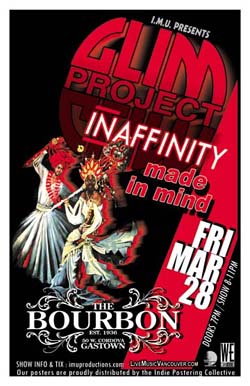