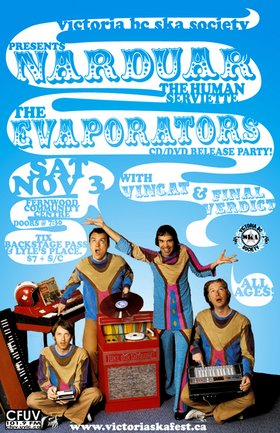 For well over ten years, The Evaporators have earned a reputation as one of Canada's most entertaining live bands, blending rollicking garage rock with some persistent onstage energy, side-spitting humour, and some very snazzy outfits. Their live shows are not simply concerts: they are raging, out of control parties that make the film Animal House resemble a church picnic. Led by the boundlessly enthusiastic

Nardwuar the Human Serviette on vocals and organ, the shows also include an abundance of audience participation and spontaneous stunts that keep the crowd grinning from ear to ear.


Reportedly, The Evaporators formed while Nardwuar and drummer Scott Livingstone were in the midst of doing push-ups in their school gym class. Since then, the band's wacky humour and musical exuberance have consistently set them apart from the hordes of dour bands whose airtight sombreness constrict even the most jaded in society.

other sites: theevaporators
Comprised of Nardwuar the Human Serviette, John Collins, Stephen Hamm and Shawn Mrazek, Vancouver, BC's The Evaporators love pounding out pure "Teenage Zit Rawk Angst" flavoured tunes. If you're wondering what that interesting concoction tastes like, keep in mind that the Evaps are "Addicted to Cheese!" Doot doola doot doo ... doot doo! more info
Audio: You Got Me Into This, Now You Get Me Out!

from Vancouver BC more info

Garden City Hardcore , formerly known as No Holding Back. more info
Submit info on this show to our admins