ELEPHANT MAN aka The Energy God in Victoria for shizzle!: ELEPHANT MAN, Clinton ...

ELEPHANT MAN aka Energy God will be playing at Element (formerly Legends) on Mon...

ELEPHANT MAN aka Energy God will be playing at Element (formerly Legends) on Monday, September 24th for the first time. You may have heard some of his hits such as Pon de River Pon de Bank, Signal de Plane, F**K You Sign, Shizzle my Nizzle and his most recent release "Five O" featuring Wyclef. Fans will be treated to a full night of dancehall and reggae. + They'll be live DVD Video Mixing on 10 Plasma's TV's Around the Club by special guest, DJ Clinton.

Elephant Man in his rough Jamaican baritone; boisterous demeanor, quick chatting lyricism and unforgettable stage presence have all helped transform him into an internationally recognized reggae phenomenon. Elephant Man's music has brought a new innovative flavor to the dancehall. His free-spirited vibration leaves you eager to do nothing less than let loose and party, making it blatantly evident that Ele..s mission is to create energy infused music that everyone can enjoy.

Elephant Man stormed through the doors of dancehall back in 1998 under the wing of Bounty Killa and the Scare Dem Crew (Boom Dandimite, Harry Toddler, Nitty Kutchie and Elephant Man) flexing his creative muscles while managing to successfully brand himself as ..Father Elephant,.. the self proclaimed Dancehall King. Elephant Man is solely responsible for reuniting dancehall music with dance and its fun, trouble-free roots, a vital element that..s been absent from the culture and replaced too often by a new wave of artists who glorify a bad mon, bad mind persona in their records. His debut, Good 2 Go (VP Records), became a worldwide smash back in 2004 with the release of chart topping party tunes like ..Signal di Plane.. and ..Pon di River, Pon di Bank,.. the single which snagged him a Source Award for ..Dancehall/Reggae Artist of the Year.. and the MTV2 nomination at the 2004 MTV Music Video Awards.

Since then, the hardcore Energy God hasn..t slowed down. He has recorded collaborations with Lil.. Jon on the ..Get Low Remix,.. R. Kelly on ..Reggae Bump Bump,.. Pitbull and Daddy Yankee on the ..Rah-Rah Remix,.. and Janet Jackson on ..All Nite (Don..t Stop),.. and also performed on stage at the 2004 BET Awards and signed with Diddy..s Bad Boy Records, all while preparing for the release of his sophomore album Let..s Get Physical (Bad Boy/VP Records). Ele linked up with Diddy back in 2005 while opening for Usher on his Truth Tour. When Ele hit the stage with an electrifying performance, the Bad Boy CEO took notice. ..When he saw my performance he was like ..Yo, Elephant, we got to do this and I was ready,.. says Bad Boy..s first reggae act. Never abandoning VP, the label that nurtured and supported Ele from the beginning, Elephant Man is excited about his major label joint venture (Bad Boy/VP Records) and looking forward to making dancehall history with Sean Combs and the entire Bad Boy family. ..I been a fan of Bad Boy for the longest time and now I..m Bad Boy for life!,.. Ele laughs. ..We gonna take dancehall to another level. 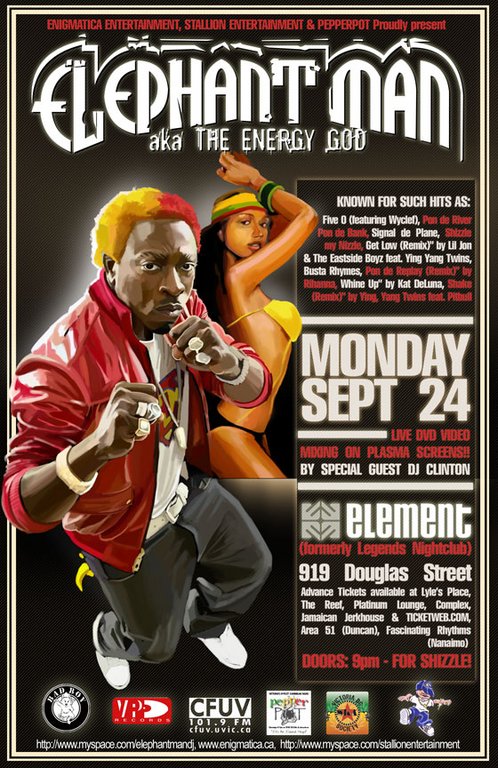