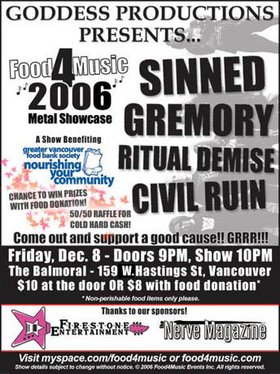 Music: Punk / Metal / Hardcore / Noise
GODDESS PRODUCTIONS Presents Food4MUSIC 2006 METAL SHOWCASE featuring: SINNED, GREMORY, RITUAL DEMISE AND CIVIL RUIN. 50/50 Raffle draw for cash plus a chance to win prizes for anyone that donates food. This show is part of the 8th installment of the Food4Music series.

shows for an awesome cause and this year expands to include signed acts!! As well a Special

Thanks to Firestone Entertainment & Nerve magazine. Merry Christmas everyone!!

From the isolation of Vancouver Island in the farthest west of Canada, Gremory brings a caliber of Brutal Technical Death Metal never before seen in this corner of the continent. A city physically isolated from the rest of Canada spawns a scene that is figuratively isolated from the realms of Technical Death Metal - consequently, Gremory has concoc... more info

After a few years and a number of member changes Civil Ruin has solidified a clear musical direction which is dedicated to brutality while not ignoring the groove and melodic influences that helped shape their direction. With an EP already recorded and the devastating brutality of the new tracks, Civil Ruin has decided to return to the studio in or... more info
Submit info on this show to our admins