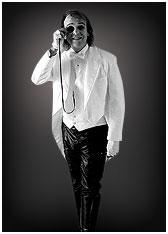 Ron Davies, (bass, vocals), whose amusements range from bagpipes to motorcycles to explosives, admits to his unrestrained music career as a hard rocker since the early ‘80’s. Having played with various club bands and original projects like “Mad Hatter”and “Silent Rage”, he’s best known for playing the character “Ron Richtofen” in “Heartaches Razz Band”, the band responsible for fitting him with a monocle and making him stand in one spot, therefore not allowing him to jump from the tops of speakers onto audience members’ laps. They also made him put on a shirt. He’s still wearing it. Always preferring a theatrical oriented project performing original material, he still plays with different groups of different styles. The Heartaches Razz band was a good outlet for playing and acting out. Now part of a fun and talented lineup in high energy cover band "Club 13".