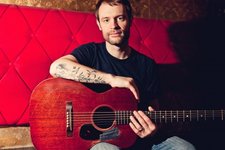 Seattle musician Rocky Votolato is a soft-spoken, very kind, very hard-working father of two, born in rural Texas and raised in the Pacific Northwest indie scene (where he fronted the acclaimed rock band Waxwing). In his decade-plus life as a songwriter and musician he has sought to articulate something essential about life, writing songs that seem to have been scratched into a boxcar wall by a worn-out and lonesome ghost. His gravelly, sandpaper smooth voice and introspective lyrics mark him as that most rare of punk-rocker-turned-acoustic-troubadours: Votolato writes graceful, understated, human, unpretentious songs, demonstrating that simplicity is still a viable option for accomplished songwriters. Walking the line between autobiographical fact and fiction, his new album, true devotion, is deceptively simple, peppering impressionistic narratives with moments of lyrical wisdom that can knock the wind out of you.
No audio samples have been linked to this profile.
No member roster has been entered (to link to musician profiles.)
Status: Unknown
- Last confirmed Feb. 7, 2012
Submit info on this band to our admins