Are now merged with The Arion Male Choir.

We are a long standing men's choir, active in Victoria since the 1970's
Victoria Male Voice Choir sings for the joy of singing, and for the joy of sharing song with others. We focus on singing for the Victoria community, including care homes, socials, churches, fundraisers,and other well known venues in Victoria.

When the choir sings, it is always such a pleasure to see faces light up, toes tap in time, and to watch as invariably one or two in the audience sings along, sometimes with a favorite song, or sometimes with nearly every song!

Often in the sing-along portion of performances, a palpable sense of communion between choir and audience is felt. We simply are people transported by the joy of singing together.

HISTORY
While the Victoria Male Voice Choir has roots in the early 1900's, formal choir activity was suspended during World War II and although some singing did take place, it was not until 1979 that a concerted effort was made to formally reconstitute the choir.
The choir performs concerts throughout the year for churches, seniors centers and service clubs. It has performed at the McPherson Playhouse, the Empress Hotel, the Victoria Convention Center and has participated in the Choir Extravaganza to assist the Prostate Cancer Centre in its fundraising efforts.

A departure from the traditional male choir, our repertoire embraces a wide range of musical styles, including spirituals, classical, Broadway, folk, rock and modern - high brow to no brow. We are an amateur choir that offers participation and training in the vocal arts.

The choir exists for the enjoyment of singing. We sing the music that we enjoy and that many others like to hear. Performing in the community is the choir's primary purpose.
You don't need special musical training to become part of our group; just a desire to sing and a willingness to expand your musical boundaries. Please consider joining The Victoria Male Voice Choir.
The welcome mat is always out! 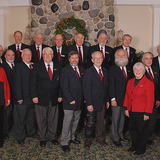