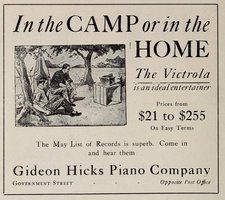 Confirmed: May. 4, 2017 (Archived)
Government Street Victoria BC
No Longer Operating

Gideon Hicks. Bass-baritone, teacher, conductor, b Stoke-Climsland, Cornwall, England, 24 Jun 1868, d Victoria, BC, 23 Nov 1958. A pupil of C.C. Bethune in London, where he sang in concert and oratorio, Hicks moved to Vancouver in 1889. Though at first a carpenter, he played flute in Vancouver's first orchestra, sang locally, and tuned pianos on Vancouver Island and in the Fraser Valley. He also established the short-lived piano firm Hicks and Lovick. He moved in 1898 to Victoria, where he was choirmaster 1898-1909 at Metropolitan Church and conductor of the Victoria Choral Society. With an augmented church choir and orchestra he conducted Messiah and The Creation with such soloists as Emma Albani and Robert Watkin-Mills. Until 1922 he was manager for Vancouver Island of Heintzman &Co. 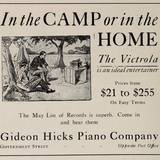