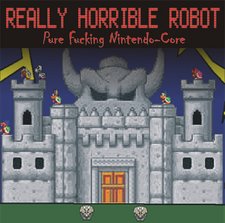 Jaron Evil
autopsy_turvy@hotmail.com
920-7774
Contact Info
Another of Jaron Evil's (Seasons Of Sorrow, Funeral Fornication) recording projects. This time, throwing serious music right out the window in place of a good laugh, mixing the burbling toilet noise of grindcore with the retro/nostalgic midi themes of the Nintendo games of yore. This project is by no means to be taken seriously. It is a fun excursion into Nintendoland thru the eyes of a metalhead. Must be heard to be believed. Hilarious stuff! Worth it alone for the song titles...(ex//... Castlevanian Hunger, Cocaine Induced Zelda Molestation, Power Of The Double Dragon-Flame, 21st Century Metroid Man, etc).
No audio samples have been linked to this profile.

Status: Unknown
"Who the hell would come to see this project anyway?!" -- Jaron Evil, - - Last confirmed Mar. 21, 2005
Submit info on this band to our admins