from Victoria BC
Broken Up - Confirmed: Feb. 22, 2017 (Archived)
Dave Hill and I had been playing in a blues band called Blame Georgie with Nick Hall-Patch around the time we put together this music/poetry/performance piece featuring the poetry of Ken Fernstrom. We called ourselves Caged Spider and it grew out of crazy jams we indulged in during our University days in the late 60's early 70's which in turn grew out of my first 1967 rock band The Pre Raphaelite Movement with Dave Kelley on bass and Larry Filipchuk on drums. Rob Lifton
No audio samples have been linked to this profile. 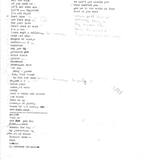 Status: Broken Up
- Last confirmed Feb. 22, 2017
Submit info on this band to our admins