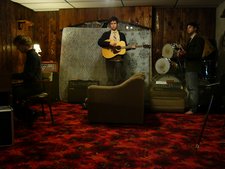 delna
delnzs@hotmail.com
Contact Info
Past Shows (11)
Poco Nemo is a ridiculously cool three piece band featuring Julian (keys/bass/backing vocals), Paul (lead vocals/guitar/keys) and Aaron (drums/ backing vocals). Once known as Three.Hour.Midnight, these guys went their seperate ways a few years ago to persue other musical endeavors. Now they're back and not a moment too soon!

Having a wide range of influences, Poco Nemo's appeal transends across a number of musical genres. As individuals, these three artists have established solid reputations locally and their rapidly rising fan base have been eagerly anticipating their first colaborative release in quite some time.

Performing in bands such as Hidell and The Lady Esther, Poco Nemo has logged hundreds of events under their belts and are well seasoned veterans of the live show. With a bevy of new songs and an up coming cd, the boys are ready to unleash a whole new sound on fans who will undoubtedly not be disappointed.
No audio samples have been linked to this profile.

Status: Unknown
check them out on MySpace http://www.myspace.com/poconemo to sample a bit of their sound. Poco Nemo is available for shows all over B.C. and will be looking to tour Western Canada in the near future. - Last confirmed Dec. 11, 2013
Submit info on this band to our admins