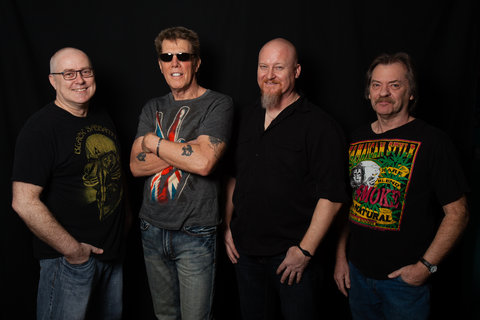 from Victoria BC
http://www.one2many.ca
other sites:
Available for Shows/Gigs - Confirmed: Jun. 22, 2015 (Awaiting Update)

Dave Jensen
one2many_victoria@hotmail.com
Contact Info
Past Shows (5)
one2many is a Victoria-based group of experienced musicians. The current line-up came together in 2014 with each guy bringing a history of experiences.

Dave’s professional career had him in Vancouver and Toronto touring extensively through central Canada with stints in Detroit and LA with bands such as Draco, Kickback and Scandal. In addition to signing with GRT Records and releasing under Quality Records, Dave played the lead in a Tibor Takacs film and play, Metal Messiah with his band Kickback providing soundtrack. Moving back to Victoria he joined Fugitive and played all around Victoria before establishing an original project, one2many, which evolved to it's current state.

Luke has played professionally since he was 17 years old. As well as being a recording artist with Gypsyland ,he has also been a sought after guitarist -vocalist for many musical acts throughout his career. He has toured Canada from coast to coast as well as England and the USA, including a stint as musical director, guitarist and back up vocalist for the Les Vogt / Sam Orbison produced Legends of Rock and Roll show band.

Dale was raised on country & western and Hawaiian guitar which prompted him to begin his music career with psychedelic 60’s music! Dale spent many years playing blues at the renowned Yale Hotel in Vancouver. He has played with The Cal Batchelor Band, Fabulous Voodoo Slaves and The Tom Morrissey Band.

Bill has been playing professionally since age 18 when he joined Chevy Ray and the Fins. He’s toured BC and the Yukon and has cut CD’s with former Victoria bands, Foul Play and Shiny on Top. A few brief stints with MacQueen , Cruel Shoes and other musicians highlight his versatility to play any genre from jazz to hard rock.

one2many is a great band - from classic to modern rock, from blues to country, the '50s to present day, these guys deliver it all!
No audio samples have been linked to this profile.

Status: Available for Shows/Gigs
- Last confirmed Jun. 22, 2015
Submit info on this band to our admins