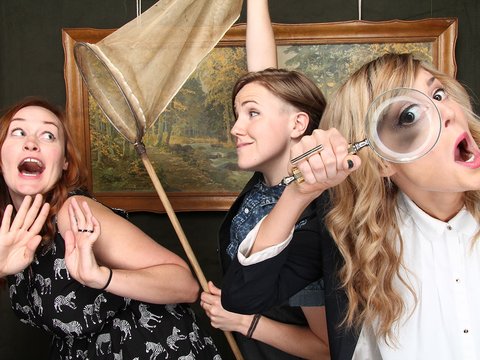 Hannah Hart
Effervescent comedian Hannah Hart is the creator and star of "My Drunk Kitchen," a web series about libation and liberty in the state of post-modern America. Exuding a unique mix of silliness, wit, and heartfelt honesty, Hannah’s talents extend to a wide variety of formats, including sketches, original music and vlogs as proven by 50MM+ video views to date.

Grace Helbig
Grace Helbig is a comedian, actress and video blogger. She's the creator and star of the IAWTV and Streamy award winning web series "DailyGrace" with over a million subscribers. She plays 'Idol' in the Streamy nominated web comedy "MyMusic" and was a regular correspondent on G4's Attack of the Show and VH1's "Best Week Ever." She's studied improv at The Peoples Improv Theater and is a member of the house team Borealis. She has a live tour called "#NoFilter" playing around the country. She's been listed on Time Magazine's 140 best Twitter feeds of 2012 and BuzzFeed's 11 Awesome Up-And-Coming Funny Ladies You Should Know.

Mamrie Hart
Mamrie Hart is comedic writer and performer living in Brooklyn, NY. Originally from a one stop light town in North Carolina, she can now be found being ridiculous on the internet. She hosts a pop culture, mixology show called 'You Deserve a Drink' along with Grace Helbig. When she isn't creating cocktail you can find her performing sketch comedy all over NYC, singing with her band Cudzoo & the Faggettes, or popping up on your TV as a nosey neighbor or general weirdo."
No audio samples have been linked to this profile.
No member roster has been entered (to link to musician profiles.)
Status: Unknown
- Last confirmed Nov. 14, 2013
Submit info on this band to our admins