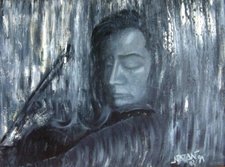 Muge Buyukcelen born in 1975, in Istanbul Turkey started playing at age 9. She studied at the Istanbul State Conservatory, where her natural talent was quickly recognized and was awarded the "best young musician" award. She studied privately with Nicolai Chumacenko, Sandra Goldberg, Ayla Erduran, and Burkhard Godhoff.

She holds a Masters degree in music performance from Bilkent University, in Ankara Turkey, and an associate teaching diploma from the Victoria Conservatory of Music in Victoria BC Canada. She has taught and performed at the Toulouse National Conservatory and is a former member of the Bilkent Symphony Orchestra. She has won numerous awards including first prize at "The Violin Competition of the Turkish Cultural Ministry" and first prize for "The Best Interpreter of Turkish Composers ".

Currently she performs with the Galiano Ensemble, Victoria Symphony, Emily Carr String Quartet and the Aventa Ensemble. She has been a featured soloist with numerous orchestras, performing in France, Switzerland, Italy, Turkey, North America, Costa Rica, Oman and Bahrain.

In 2009, Muge performed the world premiere of a piece dediicated to her called "Archimedes' Codex" composed by Michael Oesterle with The Victoria Symphony. She also premiered "La Fenetre II" by Yannick Plamondon with the Aventa Ensemble. In 2011 she completed a CD recording project and launch with the Emily Carr String Quartet entitled Hidden Treasure. In 2014 She performed the Ligeti violin concerto with the UVIC Sonic Lab. In 2015 Muge travelled to Australia and New Zealand with Aventa Ensemble, performed the Beethoven Violin Concerto and performed Black Angels with the Emily Carr String Quartet.