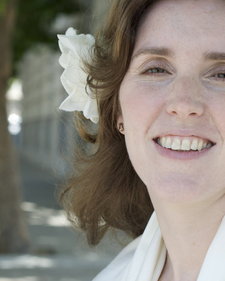 Folk singer-songwriter Moira Campbell moved to Victoria, BC from London, England in 2002. Moira released her first solo album in 2006 and in 2007 collaborated on a electronica project with composer Luke Parkin, including the track "It's A New Beginning" dedicated to Barack Obama. She wrote and performed the soundtrack for Survival of the Fittest: Stories from the West Coast Trail with producer Corwin Fox early in 2007 and worked with him on her second solo project "Climbing Mountains in the Night", released July 2008. Although her celtic roots influence her music she also enjoys performing somgs by Nick Drake, John Martyn, Leonard Cohen and others alongside her own original material. In England she enjoyed critical success in her teens with UK press darlings, Faith Over Reason and carved a reputation for the cool pure vocal performance that has seen her collaborate with St Etienne on the cult classic Only Love Can Break Your Heart. After co-writing a top twenty chart hit, Skin on Skin, with Paul Oakenfold for his Grace project, Moira formed Ova, releasing just one 3 track single, Universal Audio on Global Warming. More contemporary than Moira’s previous band, but retaining the same spontaneity and haunting beauty, Ova wrote fresh, original and uncontrived songs - a panacea for jaded ears. Since Ova broke up in January 2000, Moira has married and changed her name from Lambert to Campbell.