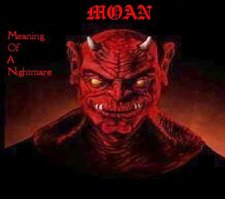 BROKEN UP from Victoria BC
http://www.moan.altpro.net
Broken Up - Confirmed: Dec. 8, 2005 (Archived)

ryan hounsome
extreme_dirtbiker06@hotmail.com
727-7726
Contact Info
Past Shows (4)
WE ARE A YOUNGE BLACK METAL ACT FROM VICTORIA BC. WE PLAY ANYWHERE WE REALLY DONT CARE. WE FORMED IN LATE 2005 AND HAVE IMPROVED ALOT SINCE THE BEGGINING. BOOK US WE WANT TO PLAY
No audio samples have been linked to this profile.

Status: Broken Up
band has broken up ryan plays for note to self now and carter and tanner well who knows what they r doing - Last confirmed Dec. 8, 2005
Submit info on this band to our admins