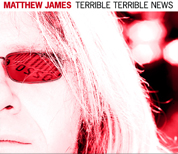 Eric or Jamie
info@matthewjamesband.com
250 544 8027
Contact Info
Past Shows (7)
If you asked him, Matthew James would probably say he’s a singer/songwriter. But that hardly does justice to the fact that, as well as writing exceptional and original songs which he sings with passion and finesse, he is an accomplished guitarist, producer and arranger.

Of course, that’s a hard thing to say about yourself...and Matthew is the kind of person who hesitates to “blow his own horn”.

The reality is, though, through a wealth of experience and real world education over the past several years, Matthew has shown himself to be a first class musician and songwriter, as well as an excellent performer. >From working as a writer and producer for Larry Norman (Solid Rock Records), to performing to a crowd of 30,000 at Creation Fest West, Matthew is ready to ...

In a way, words can do only a small amount, compared to letting the music speak for itself...and it does. Leaving audiences speechless everywhere, and radio broadcasters hungry for more, Matthew’s music produces a powerful response in the listener.

Matthew is gifted with an elusive ability to capture a prism of emotion and turn it into a spectrum of sound and words that allow people to listen and hear themselves in it.
Terrible Terrible News: The Album

Matthew’s latest album, the much-anticipated release of “Terrible Terrible News” is poised to be one of the best new releases of the year.

The album is a collaborative effort with producer Brandon Bee, who as a producer has rubbed shoulders with Lou Carteau, producer for Whitney Houston, Celine Dion, and Harry Connick Jr., and Tim Minor, who is known for his production work with Mariah Carey and Amy Grant.

Brandon is known for his intuitive grasp of today’s contemporary sound, which he applied to his work with Switchfoot’s debut albulm, and his abilities show through in flying colors on “Terrible Terrible News”.

The album flows seamlessly from track to spectacular track, and miraculously, there is not a song on this album that is designed to “fill the space”. Each bears the mark of true inspiration and precision songwriting.

Recently, Matthew was awarded “Band of the Year, 2004” at the Island Music Awards in Victoria, BC, where Matthew now resides. His album “Terrible, Terrible News” was the winner of the Q’s New Music Lab from the Victoria radio station 100.3 The Q!. His song “I Like the Pane” has been highlighted as the track of the day at Garageband.com, after receiving very enthusiastic reviews. So watch out world, as Matthew is on a mission to make so much noise that even success will have to stop and take a look.
No audio samples have been linked to this profile.

Status: Unknown
- Last confirmed Dec. 1, 2004
Submit info on this band to our admins