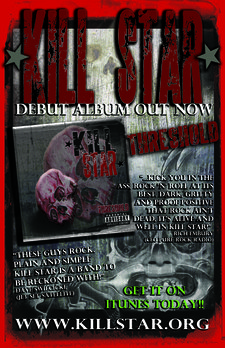 Derek D
Derekdufresne@mac.com
Contact Info
Past Shows (1)
These guys rock. Plain and simple. As their photographer, I shot them for their upcoming album. Only hearing the demos, I was instantly drawn in by the hooks within their songwriting. But it was when I shot/saw them live that I fully experienced the full power and potential of this band.

Kill Star are a unique musical phenomenon. Despite the dark overtones of some of the imagery, their sound is very warm and welcoming.

Kill Star shows that they have a lot of potential and creativity flowing through them. They demonstrate their ability to control their instruments with their player of voice versus guitar in several of their songs.

Kill Star is a band to be reckoned with!


"Kill Star is straight ahead, kick you in the ass, rock 'n' roll at its best. In the style of legendary Motorhead, "Rat Trap Baby" is dark, gritty and proof positive that rock ain't dead, it's alive and well in Kill Star!" -Rich Embury (CEO of Pure Rock Radio)

Status: Unknown
Currently recording 2nd album. Due out sling/summer 2014 - Last confirmed Jan. 26, 2014
Submit info on this band to our admins