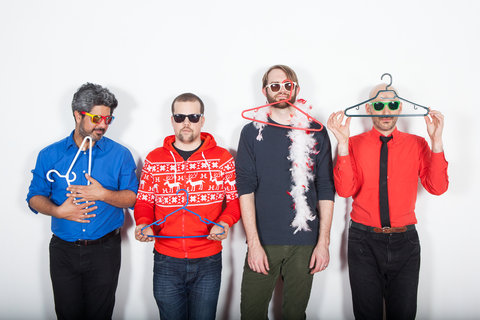 Jon Cohen Experimental perfectly encapsulates a Montreal ethic: where many of us might dip our toes in and decide a year or two later that the water is too cold, Cohen’s music persists. With this new album, Cohen saw some major life changes, including the death of a family member and a completely new lineup. His new sound explores opposing forces that parallel the creative process: the lyrics capture a spiritual aspect that holds place and focus, while the rock band runs at high speeds, humming like a well-oiled machine.
Go Getters is the band’s 5th release. Recorded by Dave Draves (Kathleen Edwards, Jim Bryson) at Little Bullhorn in Ottawa, mastered by Jett Galindo (Neil Young, Sam Roberts) at the Bakery in LA, and set for August 4th release on Sugar Gator (Jess Reimer, Moulettes), the intriguing thing about this record is its propensity to defy genre.
This is playful yet moody music,“Baby Life” is a high-energy intersection of Ween and The Strokes, while album closer “Go-Getters” bounces effortlessly from George Harrison to Lightfoot to Pavement in a single measure. “33rd Floor” channels Beatles, Blur and Jefferson Airplane. At times orchestral or grungy, the E.L.O vs. the 90’s vibe is raw and unapologetic. In the end, JCEX’s earnest songs and dynamic high-energy live shows are what shine through – the band has vested emotional strength into this album and live performances. With a confident yet loose stage presence and unpredictably precise instrumentation, Cohen’s crooning vocals and unintimidating presence emanate from anything he does, reminding even the most wound-up of us to tap a toe, maybe even jump out onto the dancefloor.
No audio samples have been linked to this profile.

Status: Available for Shows/Gigs
- Last confirmed Jul. 27, 2017
Submit info on this band to our admins