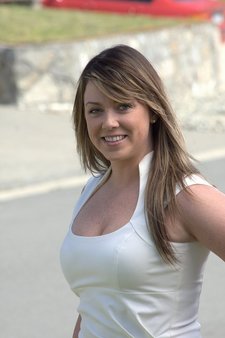 Megan Johns is a vocalist from Victoria BC, with an eclectic mix of experience. She is currently a lead vocalist with the R&B dance band, Bryden Street House Party - http://www.brydenstreet.com/, and with dance band, Fascination - http://fascinationband.com/
She placed in the top 10 of Victoria Idol 2010, and came second runner up in the 2011 competition. From that, she was asked to be an opening act for Suzanne Vega at the Macpherson Playhouse in January 2011. She has performed at a variety of weddings, corporate events, festivals and private functions. Formerly the anthem singer for the Victoria Rebels football team, she will be returning as an anthem singer this season with the Victoria Royals hockey team. Megan has a strong background in dance, and has been involved with local musicals. She is currently rehearsing for the Victoria Operatic Society's production of White Christmas, and was a cast member of their Spring 2011 production of 'Broadway-Decades in Review'.