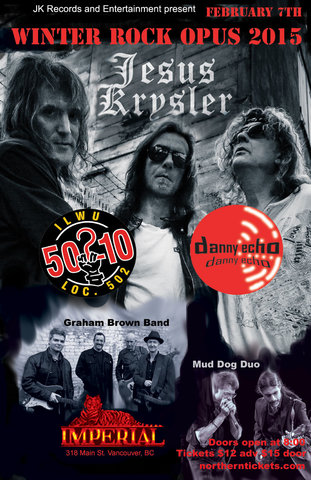 Larry Dean Jordan
databass@shaw.ca
Contact Info
Past Shows (41)
Jesus Krysler is soulful rock trio from British Columbia who has been steadily climbing in to the indie music spotlight in Canada.
With no prescribed formula, the group comprises skillful guitar work with solid song structure and has put forth a strong third album with their ‘Rock 'n Roll, What's that?’ mixed by Mike Fraser and mastered by Chris Potter. New offerings from the band and Mike is out Feb 7th 2015 with "Songs in the Key of Eh" with the band performing WINTER ROCK OPUS 2015 at the Imperial in Vancouver, BC on Sat Feb 7th
No audio samples have been linked to this profile.

Status: Available for Shows/Gigs
Playing and touring promoting the 3rd album, "ROCK 'N ROLL, WHAT'S THAT?" mixed by the rocker Mike Fraser and 4th EP "Songs in the Key of EH" - Last confirmed Jan. 30, 2015
Submit info on this band to our admins