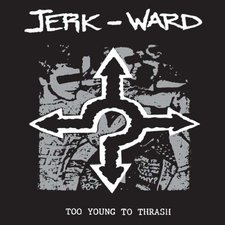 Broken Up - Confirmed: May. 21, 2010 (Archived)
http://www.myspace.com/jerkward
Label: Supreme Echo
Hardcore Thrash from Sidney-Victoria BC
Past Shows (3)

Spring '83 the group recorded unique rehearsal tapes for people who'd mailed them tapes, followed by a summer session for the BYO Victoria compilation tape, and by September they played their first show alongside Dischord recording artists Scream. At the show they met Julian, the only person they'd met who had one of their rehearsal tapes. With Randy taking on lead vocals, Julian joined on bass and they played their first gig as a quartet November '83. Their first official demo, "Inside My Head" was recorded by Neos guitarist Steve Bailey and circulated in very small numbers, with one copy even receiving a positive review by Tim Yohannon in Maximum Rock n Roll Magazine.

Returning to Steve's basement in April '84, they recorded the now legendary "Flesh & Bones" demo. Kev Smith and Steve Bailey (ex-Neos) had spent most of the previous winter making basement recordings and subsequently had guest appearances on the "Flesh & Bones" session. At the end of May, John and Kev formed the band Sludge Confrontations, debuting with Jerk Ward on June of '84, which would also be Randy's final show with the group.

Having two solid years of growth behind them, Jerk Ward folded in summer of '84 after a gig as a trio in Vancouver and a final show in Steve Bailey's basement. Bed-tracks to a final recording session were done during the day of their final show, however vocals were never recorded. Some of the songs later resurfaced with overdubbed parts by Steve and Kev on the basement studio project Harvest of Seaweed. In early '86 the original 1982 trio resurfaced with the addition of Mike Synnuck on vocals and Kev Smith on 2nd guitar to create Victoria's premier speed metal/thrashcore group Mission of Christ, lasting up until summer of 1989.

Fast-forward to 2007, Jerk Ward reunited with original members Stephen, John, and Kev accompanied by Rob Nesbitt on bass and Ricky Long on vocals to celebrate the release of the book/cd package "All Your Ears Can Hear - Underground Music in Victoria 1978-84", leaving a buzz amongst the local music scene and media. January 2009, local archive label Supreme Echo releases the Jerk Ward "Too Young To Thrash" retrospective 12" Maxi-LP and the group excitedly prepares for the release party...

Status: Broken Up
REUNION SHOWS ONLY. - Last confirmed May. 21, 2010
Submit info on this band to our admins